Information about books, ebooks, and and CDs by David Pike are shown in date order, further down the page.

New paperback poetry book by David Pike, By Association, published October 2021. Front cover photo: Newquay harbour. Rear cover photo, Market Place, Camelford, (click on image to enlarge). Sleeve note by Paul Tanner. Foreword by Andrew Barber. This is DP's sixth poetry book. The book is also viewable via Cornwall Libraries. UK delivered  price is £6.99. For your information David Pike is the founder and editor of Pulsar Poetry Magazine and webzine which commenced from 1995, and continues as this web.  To purchase or enquire about By Association please email David Pike via pulsar.ed@btinternet.com   You may also order via bookshops, quote ISBN 978-0-9570254-9-3 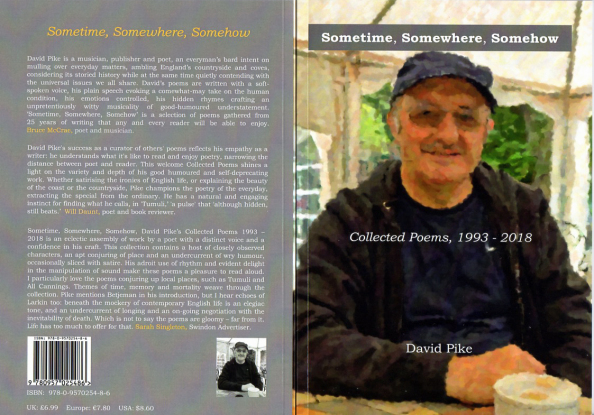 Sometime, Somewhere, Somehow, David Pike’s Collected Poems 1993 – 2018 is an eclectic assembly of work by a poet with a distinct voice and a confidence in his craft. This collection contains a host of closely observed characters, an apt conjuring of place and an undercurrent of wry humour, occasionally sliced with satire. His adroit use of rhythm and evident delight in the manipulation of sound make these poems a pleasure to read aloud.   I particularly love the poems conjuring up local places, such as Tumuli and All Cannings. Themes of time, memory and mortality weave through the collection. Pike mentions Betjeman in his introduction, but I hear echoes of Larkin too: beneath the mockery of contemporary English life is an elegiac tone, and an undercurrent of longing and an on-going negotiation with the inevitability of death. Which is not to say the poems are gloomy – far from it. Life has too much to offer for that. Sarah Singleton, Swindon Advertiser.

Please view information about my newly published, (February 2017), short print-run, poetry paperback, At Durgan; info below.  A review of At Durgan was originally displayed on the Message in a Bottle poetry website; this website has since unfortunately expired.

Also available as an ebook download via Amazon link: Link to ebook, At Durgan

I hope I may have intrigued you enough to purchase a copy. DP.

A5 size paperback book with a full colour cover and 77 pages.

Sleeve note by Andrew Barber. “This is a wonderfully evocative and varied collection, written with a light (and often light-hearted) touch.  There are poems about nature, and man’s relationship with his environment, and there are poems about human nature, with some wry tongue-in-cheek social observation.  David Pike has an informal and accessible tone to his writing that is all his own.”

To enquire or to request a review copy email: pulsar.ed@btinternet.com 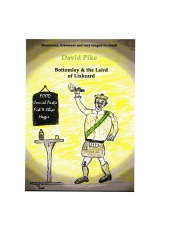 Bottomley and the Laird of Liskeard.

Book III in the Bottomley series.

Blenkinsopp mistakenly thought he had Scottish ancestry.  As a result of this, and to enrich his dull and monochrome life, he took this to another level and declared himself “The Laird of Liskeard."  The Cornish townsfolk of Liskeard ignored his Scottish regalia, ersatz mannerisms and delusions of grandeur.  They viewed him as the harmless buffoon that he was.  One thing that couldn't be ignored was that Blenkinsopp was very wealthy.  Where did this ongoing source of income come from?  No one in Liskeard was entirely sure, and no one really cared.

But in the outer reaches of Hades the wealthy nature of Blenkinsopp's bizarre and possibly damaging existence, drew attention.  A bored, (Friday afternoon), I.T. geek pushed a button and started a bungling chain of events that needed rectification.   Bottomley, an enormous rotting, hideous, and incompetent long term incumbent of Hades was nudged out of retirement and transported to Liskeard - with a view to bumping Blenkinsopp off.  A series of farcical situations take place that affect the fortunes of both Blenkinsopp and Bottomley.

Available via the following link to amazon: Bottomley and the Laird of Liskeard

Click here to link to Amazon: Bottomley in Love, novel.

Bottomley is not a handsome fellow.  Calling him a ‘fellow,’ is also pushing the boundaries a bit.  He is in fact a stonking great rotting ogre of reptilian appearance and has been a displaced incumbent of Hades for many eons.  Being a general worker for the Lower Authority, (forlornly class 2), he is required to; do what he’s told, button his lip, shut up, and get the hell on with it.  This is all very well but it can become tedious with only menial tasks and degradation to look forward to on an ongoing basis.  Occasional Random Death Selection, (RDS), missions help to break up the ongoing sameness of everyday non-life and give Bottomley a chance to drink beer, eat unnecessary food, play darts and bump-off despicable UK human residents.  To other Hades incumbents Bottomley is a misnomer because he is not entirely evil and is known to possess an ounce of decency, in a place where love is a dangerous word and subject.  Then he receives a disturbing anonymous message, “Bottomley, I love you, I need you, I want you . . .”

Now available as an ebook to download to Kindle or to other electronic devices via Amazon.com  Kindle price £1.95.

Bottomley is an incompetent and hideous general worker from Hell, (GWH class 1).  He didn’t ask for this role, after his demise it just happened!  There’s not much to write home about in Hades, the hours are long and the wages of sin are poor – in spite of rumours to the contrary.  Bottomley resides in a decomposing lime flower coloured room, which has an interesting view over a live giblet extraction factory, (it ticks all of the boxes as ‘desirable’ in Hades TV residential relocation programmes).

Things turn more interesting when Bottomley steps out on planet Earth with his boss, (Drusilla, she of the sexy hips, long tongue and reptilian tail), to carry out Random Death Selection (RDS) missions, to net the souls of errant evil humans.   Basically, persons who have outlived their welcome on Earth – or have just been a tad jammy.  Their mission, (amongst others), involves the pursuit of Lindenthorp, a distraction burglar, who in Hades and on Earth is best described as a bit of a ‘sh1t.’ In their bungling pursuit mistakes are a made and expletives such as ‘frig my wig,’ and ‘waggle my warts,’ are heard at high volume.  Along the way Bottomley adopts a phantom squashed dog, Glutinous, who has a very low IQ and more than a few low habits. . .

A Cold Night For Norman,

and other short stories by David Pike

Now available as an ebook to download to Kindle or smart phone via Amazon.com  Kindle price £1.98.

Link to Amazon by clicking on: A Cold Night for Norman

Short stories of a macabre, irreverent, ghostly and humorous nature by David Pike.

"Norman was an ornamental garden gnome. He looked very twee with a solemn face, rosy red cheeks and a pointed hat. The purchase had been Jean's idea. She liked gnomes - named him Norman. But to James Weston the thing was a monstrosity, naff and tasteless. He hated every inch of the painted effigy. But Weston didn't realise the feeling was mutual."

Also available as an ebook to download to Kindle or to other electronic devices via Amazon.com  Kindle price £2.00

Note: if you don't have a Kindle you can still download DP's books to i-Phone, Windows PC, Mac, i-Pad or Android by utilising the following free Amazon Apps via: http://www.amazon.co.uk/gp/feature.html/ref=dig_arl_box?ie=UTF8&docId=1000425503

Now available as an ebook to download to Kindle or smart phone via Amazon.com link: In the Mix, Poems by David Pike

The majority of the poems have been published in small magazines and newspapers and many have been aired via the BBC. Foreword by American poet, Rose Solari. Visit: www.rosesolari.com"I have spoken to David Pike on a number of occasions and have always been impressed with his passion for the written word, be it in story form, poetry or prose.  His hard work in organising the regular Pulsar poetry gatherings demonstrates again his enthusiasm for bringing poetry to life in every sense of the word.   His new book of poems "In the Mix" further serves to prove this, and I am sure will be enjoyed by readers and writers alike."

"Few people have the talent to take ordinary, everyday words and transform them into something extraordinary. David Pike’s natural feel for language is stunning. The breadth of this collection is exhilarating, touching on serious themes such as ageing, intellect, childhood and social observation and then throwing in the downright hilarious. A superb work."

"David Pike is an acute observer of the unconscious drollery of much of human behaviour in the quotidian, but also a gentle revealer of the small ways in which nature can make us suddenly step back and see the big picture of the true value of our existence. These are enviable qualities indeed."

"David Pike has a controlled, deceptively relaxed style, an appropriate foil for his wry, affectionate view of a world that seems, in these poems at least, at one moment joyfully absurd and at the next haunting and cruel. As one might expect from a poet comfortable with reading his work to audiences, Pike’s work is accessible. However, it would be a mistake to assume his poetry operates on one level only. I found myself drawn back to it repeatedly as the images and sound refused to fade. Recommended!"

In the Mix is also displayed on Robin Wilkey's website and may be viewed via: http://www.wilkey.org.uk/books/reviews/pike.htm

On The Ridge: poems by David Pike, A5 size, 85 page, perfect-bound book with full colour cover, foreword by Chris Highton of BBC Wiltshire Sound, published in 1993, Ligden Publishers ISBN 9780952043119,  price £2.99 UK   Order via the Pulsar editorial address, (add £1.50 to the price to cover postage and packing), or order on-line via Amazon, click on the following hyperlink to go straight to Amazon www.amazon.co.uk